Earthquakes and severe aftershocks are causing great devastation in Syria and Turkey. Dorcas has been active in Syria for many years and is directly experiencing the consequences of this disaster itself. The office in Aleppo was heavily damaged. But country office staff took immediate action, offering support to victims based on what is needed. Blankets, warm clothes and food are currently being distributed. This humanitarian disaster calls for immediate action and support. Support our humanitarian assistance for those in need in Syria. 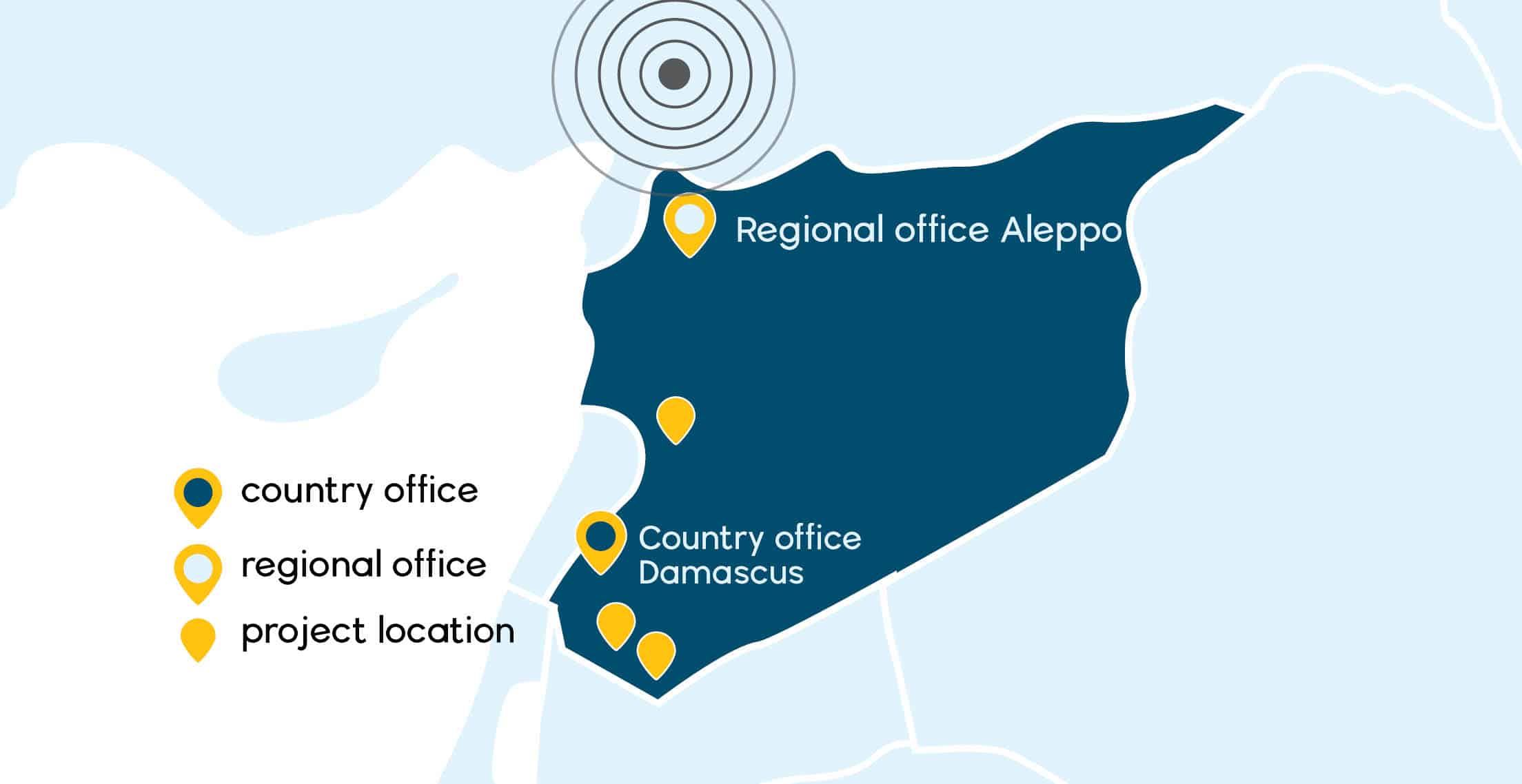 Syria: Meeting the basic needs of vulnerable IDPs - and supporting their recovery and wellbeing

Falling bombs, plumes of smoke - another deadly airstrike. Yet, for the Syrian people, it is hard to know who is responsible anymore. It could be a terrorist group, the international coalition or the regime. Ten years on, Syria's brutal civil war is far from over.

13.1 million people require humanitarian assistance, including more than 2 million people trapped in inaccessible areas. Many have fled to neighbouring states - a mass exodus - where new threats surface. As fighting intensifies in the north east of the country, some Syrian refugees and IDPs have made a break for 'home'. Families return to face crippling food shortages and scarce access to food, water and healthcare - a land once steeped in history, reduced to rubble.

The toll on Syrian women has been particularly ruthless. Many are now the sole providers for their families, after losing husbands and fathers to the war. Children, traumatised and exposed, face a number of acute threats to their safety and wellbeing including sexual violence and abduction. More than a third of the country's schools are either damaged or destroyed, leaving no safe haven.

Syria has a population of 18.1 million people

What we do in Syria

Dorcas provides emergency relief, protection and psychosocial support to vulnerable IDP's across Syria. Our community-driven programmes focus on the specific needs of women and girls - living through a major shift in gender roles - and contribute towards reconciliation and structural transformation.

Our psychosocial support and protection programmes - together with our network of community centres - offer adults and youth a safe space to process their experiences and plan for a better future. Parents suffering chronic trauma learn how to deal with loss, manage stress and create a stable environment for their children. Our activities focus on the prevention of sexual and gender-based violence (SGBV) among women and girls and the protection of vulnerable groups such as people with disabilities and special needs.

As an extension of our community-based protection services, we provide early learning opportunities for vulnerable children in Aleppo, Rural Damascus and Homs. We also offer technical and micro-business skills training for youth and adults, supporting them in the development of a micro-business or income-generating activity.

Following an airstrike, we work closely with the community to rebuild hospital infrastructure and make vital staff and equipment available. When the building is inoperative, we also stock mobile clinics with medical supplies that move fast to deliver critical health services in hard-hit areas. In 2019, we were able to improve access to quality healthcare in North East and South West Syria thanks to the ongoing support of the Syrian Humanitarian Fund (SHF).

Our school feeding programme provides free schools meals to Syrian children attending public primary schools in Aleppo city and beyond - an extra incentive for parents to keep them in the system. We also deliver emergency food supplies - including food vouchers - to displaced and vulnerable families.

By late 2016, the fall of Aleppo was certain. Syrian forces had recaptured the largest rebel stronghold in the region. The seizure of Hanano district, in north-east Aleppo, left some 275,000 people under siege as the army's offensive continued. Deprived of food and medical supplies, many citizens fled to safety. Yet, others stayed - bound to their homeland.

For those who did, life under siege - though stabilising somewhat - is not without hardship. Some 6.5 million Syrians are acutely food insecure and an additional 4 million people are at risk of becoming so. This is largely due to the major reduction in livelihoods opportunities. With infrastructure and basic services destroyed by conflict it is very difficult for families to stay self-reliant.

"I am a firm believer in prioritising mental health and psychosocial support in emergency humanitarian aid and Dorcas' activities. The sooner we act following a conflict or crisis, the more chance a child or young person has of recovery. That's why I joined the 2019 International Conference on Mental Health and Psychosocial Support (MHPSS) in Crisis Situations in Amsterdam. Humanitarian aid has historically focused on water, food and shelter - and that will continue to be vital. But in light of the global mental health crisis, we need to do more - particularly in countries like Syria where mental illness invites shame or remains a taboo. These are the people who go unseen. It is our duty to reach them."

Biggest disaster in Syria is yet to come

Dignity, Freedom, and Justice for All – Human Rights Day 2022

Resilience of Older Persons in a Changing World

New CEO of Dorcas Agnes Kroese: ‘I keep hope by looking people in the eyes’