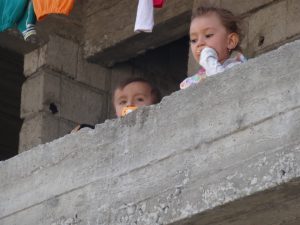 Representatives of Dutch NGOs are in northern Iraq for a needs assessment. Joop, on this mission for Dorcas, reports the following from Erbil :

‘This morning the three of us on this assessment mission together with Dorcas’ local partner organisation went to visit places where the internally displaced people live. But ‘live’ seems almost too big a word for it. The first group we met, all Yezidis, lives in an unfinished house in a street with similar houses.  The owner kindly allowed them to stay there for a few weeks. Dorcas’ partner gave them food and cooking utensils. We counted twelve people, all of them women and children except for one man. ‘We were warned by our neighbours a few months ago,’ one of the women said. ‘We left Sirjan as quickly as we could.’ But it was not quickly enough. Her brother and his son were killed. Another brother was kidnapped by IS. ‘We don’t know where he is or how he is doing.’ After several months of wandering around, they returned to Iraq via Syria. Erbil is a safe place for now, but their future is uncertain. What happened to the kidnapped brother? How will they survive the cold winter and where will they find a place to live in peace?