Times are changing in the world or relief aid. Agencies do not primarily distribute food and clothing in emergency situations anymore. Instead, we provide financial support to families and individuals.

In the past three years, Dorcas has provided nearly €3 million ($3.3 million) to help people financially, especially in Lebanon, Ukraine and Iraq. The impact on people’s lives has been dramatic. Dorcas has a thorough monitoring system to ensure that recipients use the funds for their intended purposes.

The financial support comes in various forms: vouchers, cash, and digital transfers via a card or cell phone. Dorcas selects which means is best suited for specific situations. By providing financial assistance, Dorcas has discovered new benefits for the local economy as well as for the direct beneficiaries.

Self-Worth and the Ability to Choose

One of the greatest advantages of financial support is that it gives recipients a sense of self-worth. Beneficiaries see themselves as responsible individuals who know how to spend money. The approach is tailored to meet the needs of each family, as they understand better than anyone else what they need most and spend money accordingly.

For example, 62-year-old Natalya from Ukraine says, “I’m very thankful Dorcas helped me in this way.” She received a stipend on several occasions in 2016 after she fled the conflict and had to leave everything behind. She was able to buy medication and pay for electricity and is thankful for the freedom she had to use the funds in this manner.

When Dorcas provides aid in this way it benefits entire communities and boosts economies, as beneficiaries spend the money locally. When food parcels and other goods are imported into a country as relief aid it often has the opposite effect because people do not spend in the local economy.

Vouchers, cash or digital transactions almost always cost less than distributing food parcels and emergency packages because there are no transport and storage costs. A study done in 2014 compared the effects of food aid and financial assistance, concluding that 18% more people are helped when the aid is financial rather than material.

Dorcas continues to provide food parcels and other material aid in locations where the local economy is not functioning, and where drought and other scarcity is a major consideration. 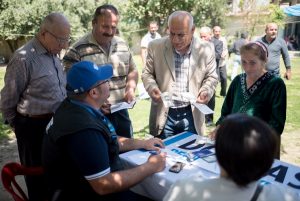