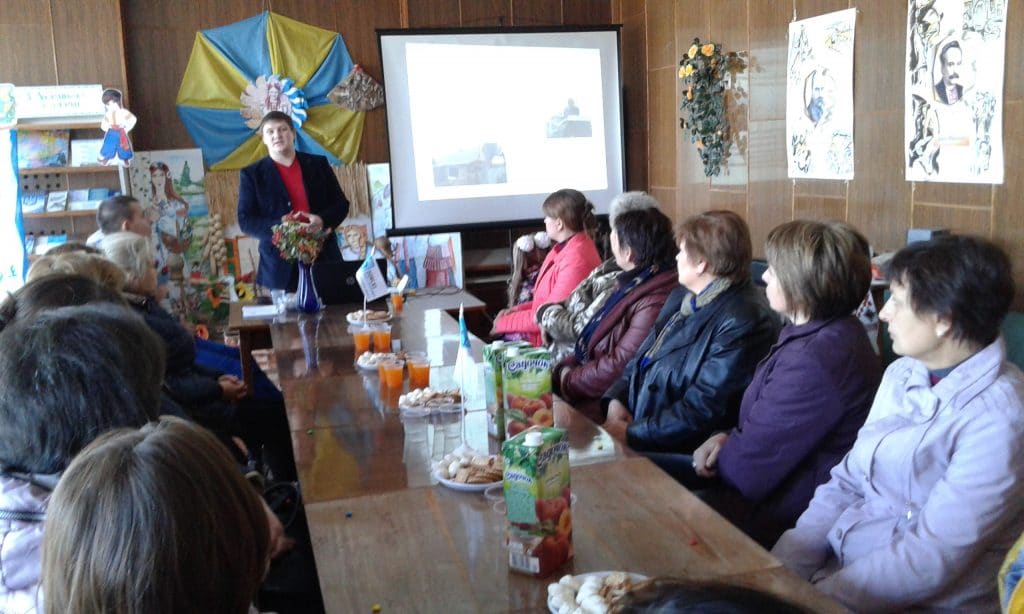 Within the frame of UkJR III objectives Dorcas arranges protection meetings to improve social cohesion and resilience among 1,000 conflict-affected people in Donetsk region (GCA). Both Dorcas beneficiaries and host community representatives are present at such meetings. As Dorcas cooperates closely with local authorities, all the meetings take place at public schools, houses of culture and even governmental institutions premises.

The purpose of such meetings is to get people know each other, to talk about difficulties they face on a daily basis, to provide protection and awareness raising materials on mines, legal support opportunities etc. People at these meetings take an active part in discussion sessions on stress, psychological assistance for kids, lack of money and its wise stewardship. While adults are engaged in their discussion part of Dorcas team has programs with kids in a separate room where they can plan, draw, sing songs, do some crafts, listen to interesting stories and eat some treats.

At the end of the meeting drinks and food are offered when people have a chance to talk to Dorcas and share their stories. As an example Alexander and Anna can be mentioned here: This IDP family was supported by Dorcas. The life of this family has been dramatically changed by the conflict in East Ukraine. Before the conflict Alexander and Anna both had well paid jobs, a nice house in Donetsk and everything they needed. When shelling suddenly started and their lives were endangered, they had to leave the city immediately, taking only clothes and documents. At present the family of father, mother and two children live in Dachne town near Kurakhove. The small house they currently live in was built as a temporary summer facility. It doesn’t have plumbing to water and it’s not suitable for winter cold at all. Alexander and Anna lost their jobs and they can’t find a job in Kurakhove either, because the whole city is crowded by many people with a story like theirs, so the only income source for this family is farming, and occasional jobs. Despite long lasting life hardships, Alexander and Anna are optimistic. They say that though their situation they’ve learnt that happiness in not about manicure, cosmetics or any financial wealth at all.

Also people can have an individual meeting with Dorcas psychologist to share some difficult experience and receive first psychological aid.

After the meeting all participants fill feedback sheets where they express their gratitude and joy to be part of this meeting. Such meetings are very useful both for protection and psychological reasons. Dorcas does its best to make people feel secure, interested and a little bit happier.